“The full range of emotions includes happiness, sorrow, anger, despair, joy, fear, and excitement. Why do we focus only on the ‘positive’ ones when the others are just as much a part of life? We hurt ourselves and stunt our emotional growth when we don’t allow ourselves to fully experience every part of existence. Catharsis is about expressing the unexpressed, saying the unsaid, and becoming stronger from having done it. It’s an emotional rebirth.”

Catharsis is Kat Felicis Ioco’s debut symphonic metal album released 25 October 2019. Her classically trained vocals soar over and punch through pounding drums, sweeping strings, distorted guitars, and powerful keyboards. Each song features her highly melodic compositional style and bluntly honest lyrics, dealing with topics such as inequality (“Done”), depression (“Emotional Flatline”), loss (“Rest in Peace”), lack of control (“Puppetmaster”), and stigmatization leading to bullying and hate crimes (“Monster”). Despite the heavy subject matter, Catharsis has subtle threads of hope woven through it without offering solutions; even though every situation is different, merely expressing a feeling validates the experience and makes it seem better, providing hope that things can change.

Social media related to this album is tagged #katcatharsis2019 on all platforms. 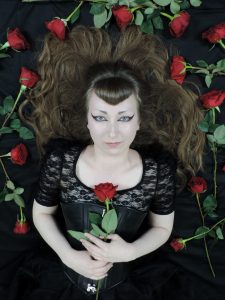